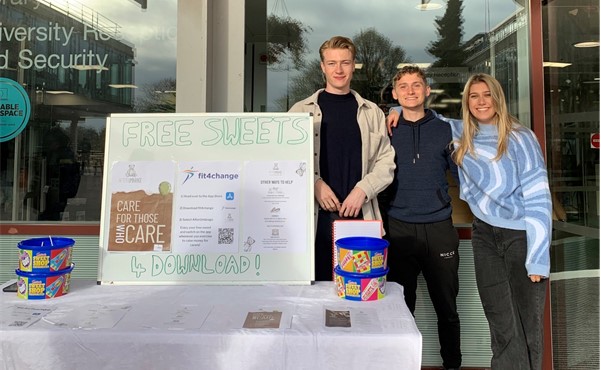 Posted By: After Umbrage
8 Dec

We are proud to introduce you to two more members of the Bath University Team. They are part of the team supporting After Umbrage. It’s part of their third-year Business degree course. They have chosen After Umbrage to help us raise awareness with a new, younger audience and to fundraise for us. Dominic and Lily are supporting After Umbrage and they join Jack, Lucas, Marta, and Grace. Together they are making an impact so that we can support more carers by giving them a free respite break at Kingham Cottage.

We had a chat with both Dom and Lily.

Dominic Mitchell, from Wrexham, Wales, chose Bath University primarily due to the great reputation of the Business degree course. Also, because he said there is the opportunity to gain commercial experience at two separate companies. “Of course, Bath is a beautiful city, and I’m loving going to university here!”, said Dom.

What is the highlight of your course to date?

Dom says, “Securing my second commercial placement at CIL Management Consultants. It’s a definite high point. I’m really looking forward to starting in February 2022, and can’t wait to see what I can gain from the experience.”

How did you first learn about After Umbrage and what was your first impression?

“I first encountered After Umbrage through the briefing for this project, and after a brief overview of the motive and operations behind the charity I was immediately impressed”, said Dom.

One of my close friends from back home is a part-time carer for a person in need, where he often does two 24 hour shifts a week. Having spoken to him about his experiences a few times, it really has enhanced the respect I have for carers and the great work they do that often goes unappreciated.

Were you aware of the number of people caring for loved ones in the UK? What was your reaction when learning about the role of carers?

Personally, I was amazed that 1 in 8 adults in the UK is a carer. This was easily double what I would have expected and really opened my eyes to the scale of the caring sector.

Are you enjoying this project for After Umbrage?

“For me, the most enjoyable part of this project is seeing the good that this charity is bringing to the world. Especially the comments of the families of the beneficiaries. It’s also fun to try and bring out the creative side to raise awareness for the charity.”

I hope that our work has impact, such as a widespread improvement in the awareness of After Umbrage. that might be through extra social media followers or higher engagement in social posts.

Next up is Lily Hawking from Warwick

What made you choose Bath and the course you are on?

“I don’t have any personal experience of caring or know any carers, but being introduced to After Umbrage has given me the utmost respect for them and that it must be an extremely difficult role,” says Lily.

“I never really thought about how many carers there were in the UK but finding out it was 1 in 8 shocked me! It made me realise how many incredible people there are out there helping people in need,” says Lily.

“Knowing that Kingham Cottage is near Bath is a bonus. I visited Bath on a school trip when I was younger and fell in love with the city! I also knew I wanted to study business at uni and the course at Bath is so unique. With the opportunity to do 2 six month placements, it gives you a head start when leaving Uni,” says Lily.

What is the highlight of your course to date?

My highlight is securing both my placements. My first placement at Heinz was a real highlight for me and I really enjoyed it. I learnt so much in the six months working there and the skills I developed in the role helped me to attain my second placement at Wild Cosmetics.

What are you enjoying the most about working with After Umbrage?

I am enjoying the relationship we have been able to make with the charity and getting to know the team a bit better. Tara and Tracy have been so amazing in helping us and I look forward to continuing to work with them. We definitely took a while to come up with our proposal because we wanted to ensure it aligned with the charities targets but we are happy with the proposal chosen.

What change or impact would you like your work to have?

I hope that through our work we can raise awareness of After Umbrage and hopefully raise some money to help contribute towards the second cottage with the fit4change app.

We thank Dominic and Lily for their support of After Umbrage. They are making such a difference.