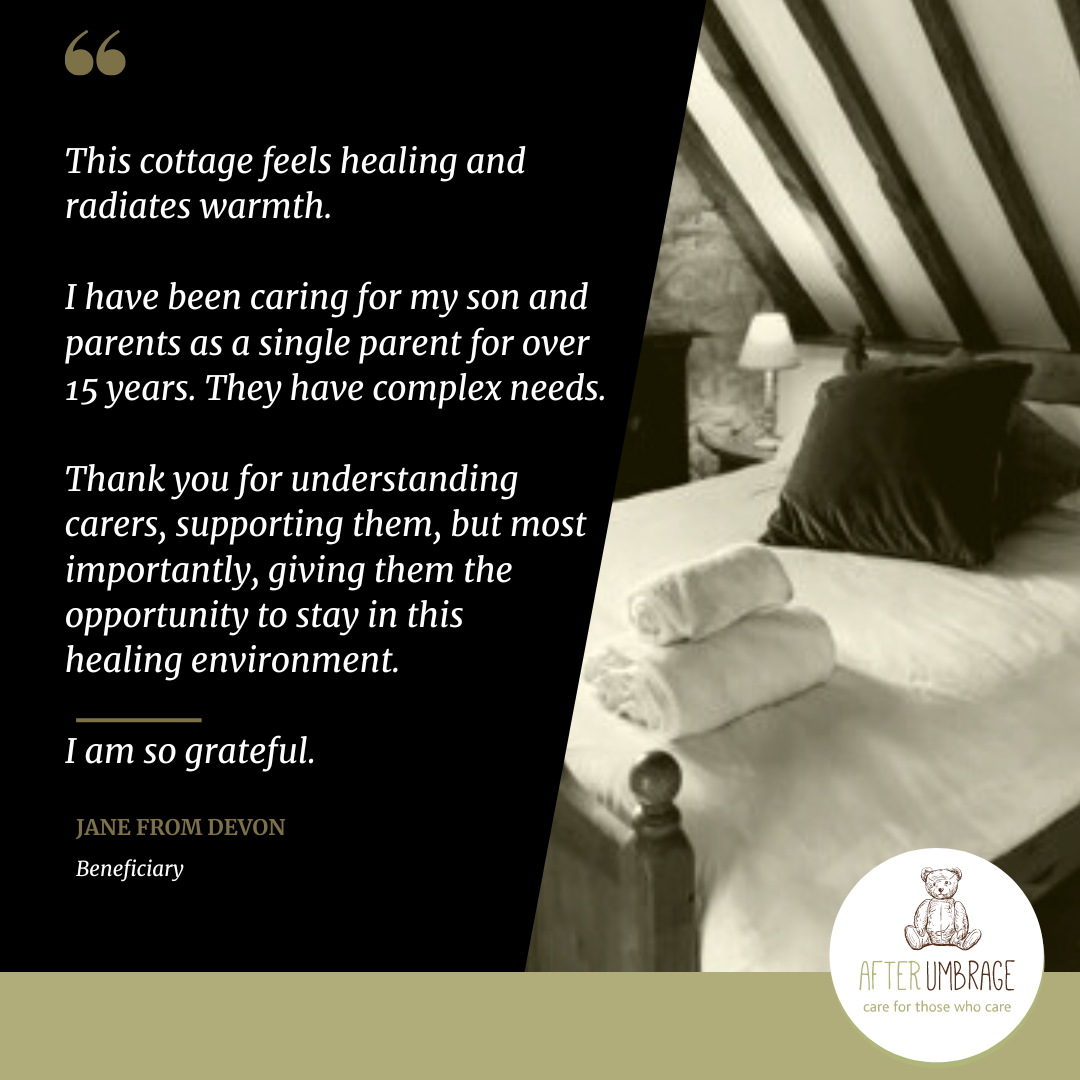 Posted By: After Umbrage
27 Jul

Jane and her son, Louis, who is 15 years old, are from Paignton, Devon. He has high functioning autism (used to be called Aspergers), ADHD, anxiety, and OCD. She talks to us about her life as an unpaid carer and how she loved her stay at Kingham Cottage this Spring.

Jane is very matter-of-fact and real about her role as a mother and unpaid carer. If I don’t do it, it doesn’t get done.’ This is her ethos and she leads a very busy life. Always on the go. Her escape is wild swimming. As she lives by the sea she loves a dip in the early morning or in the evening.

She has to work to pay the bills

For Jane, it works best to do temporary work which she does for a Mortgage Advisor. It means she has time to meet all her other demands in life but still bring in an income for her and Louis.

How did Covid affect you and Louis?

Louis was already out of mainstream school before Covid struck. In fact, since 2019, Louis was not well mentally and we felt that we had virtually invented the word lockdown before it became widely used. My elderly parents live around the corner and I was already struggling with needing to be in two places at once.

Jane remembers, at the beginning of lockdown, that she was worried about getting food for everyone. ‘I was in the habit of doing a big shop and buying 14 ready meals to last a fortnight for my parents. Having queued with so many others to enter and shop in the supermarket I remember feeling panic when I was told I could only buy 4 ready meals. I asked to talk to a manager who was kind, but my covid experience is full of little episodes just like that.’

Jane has two sets of friends. Those whose loved ones have their own set of complex needs and those living a very different life. I cherish both and sometimes when you are a ‘Carer Mum’ and having a rubbish day you just want to be yourself and be treated normally. I can do that with all my friends.

It just gets different

I used to hope life would get easier. It doesn’t. It just becomes different and I have to adjust to a new set of challenges. Louis went to a brilliant primary school and had a good transition to secondary. I was quietly relieved that he avoided any bullying.

Louis started deteriorating. Initially, the school would call me and ask me to pick him up early – 2 pm. Then it was before lunch. His world started falling apart. By Easter, he had a massive meltdown and at the age of 11 years, he tried to kill himself.

We had the support of the Crisis Team but then found ourselves between departments. We were like a ping pong ball – getting nowhere. So he came home permanently from March 2019 and we managed in our own form of lockdown.

It was a difficult time. I fought until I could no more. Whilst I realised Louis needed to attend a special school, there wasn’t one in our catchment area that was suitable. I was also clear that he doesn’t have special needs or learning difficulties. In fact, he’s very bright. He just doesn’t follow trends and hence doesn’t fit in. I would draw a parallel between Louis’ life and building a house with scaffolding around it. The scaffolding is taken away as soon as improvement is evident. It feels like being penalised for succeeding.

But life isn’t like that. There was a suitable school out of catchment. I spend half my life filling in forms ASKING for the help we need. We hit a dead end at this point because no one took ownership of our needs or wanted to help. It was always the responsibility of another department. Eventually, I took the Local Educational Authority to court. It was grueling yet we won the case. We felt relief when Louis was given permission to attend the out-of-catchment school that was most suitable for him.

Louis is proud of his autism

We have a different approach. I feel we are robbed of ‘normal’ yet Louis is proud to be autistic. I wouldn’t choose it for him because it makes life so difficult.

Jane cared for both her parents, Janet and John, up to and during Covid lockdown. Her Mum had vascular dementia but fortunately, it didn’t change her personality. She was always easygoing right up to the age of 84. She lost her sight when Louis was 2 years old and John drove her everywhere. ‘Because he was so devoted to Mum, we didn’t notice his decline.’ He is getting increasingly forgetful though. He set fire to the kitchen a couple of months ago. I do all his appointments and hospital visits with him.

‘At one point, all four of us had Covid. It was tough and there was one day when I couldn’t get out of bed to care for everyone else.’

He goes to school taking the provided transport and is getting on quite well. When he is passionate about a subject he is deeply tenacious. His researching skills are second to none and he has an uncanny recall of places he’s visited and those he’s researched online. He’s like Sat Nav in person. This independence means that Jane has been able to take on more work to bring in the income they need.

A Spring stay at Kingham Cottage

Jane’s visit to Bath and Kingham Cottage was her first break away from caring for 15 years. She said it was blissful and calming. ‘This cottage feels healing and radiates warmth.’ She met up with a friend at one point and explored the plentiful walks as well as the city life.

Jane’s pragmatic approach means that they take small steps and plan very little. She says, ‘I feel very aware that people in public life don’t understand caring. It would be good to see that change – for us and for the millions of carers in the UK.’

We thank Jane for talking to us about her life as an unpaid carer and how she loved her stay at Kingham Cottage.