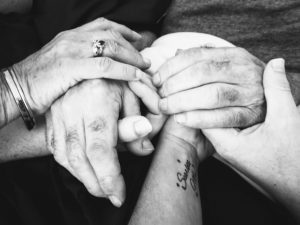 What were your struggles and your joys as a carer? What is your Harry Potter Story?

I think that none of us would say we were carers. Rather more, we think of it as having Dad where he wanted to be – at home. He was amidst the love of the family with visits from the grandchildren. There was no way he was going anywhere else.

On reflection, I think the most significant struggle was not being listened to, in the early days. Because it is human nature to ask what if? What if they had given Dad the scan we asked for? But you can’t go there.

There were some very real struggles such as getting food supplements as a drink, computers not talking to each other. Stuff that is absolutely ridiculous in the context of what is happening to someone and their family.

We try to look back at those times, with love and to remember the good times within them.

We were always together and that is what mattered.

There were times when the carers would come and the children were lying on the bed with Dad, or trying to use the hoist. Not ideal I realise, but this was a very real situation and we wanted the children to be relaxed and not afraid.

There was a day that Dad decided to sell one of his motorbikes. It was a huge military-like manoeuvre to get Dad outside with the bike so that he could clean it. Pretty impressive for someone with very little eyesight! But it was important to him that he ‘pulled his weight’. He even helped my brother to paint the gates, which is a lovely memory. 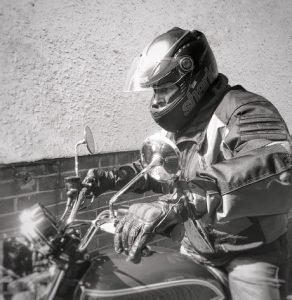 Another personal favourite of mine was that we used to walk him down the garden to a seat and he would sit with his feet in a bowl of water and listen to the children in the pool.

The day he came home from the hospital for the last time was also very bizarre. My sister waited with him, whilst we went ahead and prepared. The grandchildren were so excited as they had no idea what the implications were and they made him a red carpet to be wheeled in on.

And this is also going to sound very strange because it was by no means a joy, but something very special was a full biker traffic-stopping escort for his funeral, which is what my mum had promised him.

What did a visit to Kingham Cottage mean to you?

It’s really hard to put into words what the stay meant. Leading up to it,  it gave us something to look forward to. Whilst we were there, to be honest, we found it quite overwhelming that someone would care so much to do this for us. In fact, for all the other beneficiaries. There is an energy about the cottage that just welcomes you. It’s an amazing thing to do for others!

After Umbrage would like to thank Sarah Potter for her open, candid account of her personal and very difficult Harry Potter story. We wish you, Sarah, and your family happiness and comfort in 2020 and beyond.