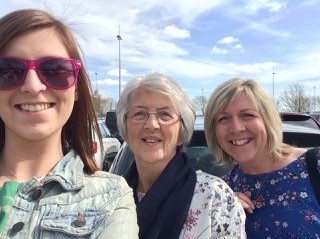 Posted By: After Umbrage
3 Mar

As a small charity, we cherish letters from our beneficiaries. We love thank you cards too. This letter, ‘Dear After Umbrage, love Sara’ is rather special. It is a heartwarming, honest, and vulnerable account of being an unpaid carer. Sara Bailey and her family have booked a stay at Kingham Cottage later this year. Sara wants to give readers an insight into her story. She’s a candid writer and these are her words.

Thank you so much for booking my husband and I on a break for carers at Kingham Cottage. We are absolutely delighted and can’t wait until November (Covid allowing!).

I am writing to give you an insight into my story in the hope it may help others going through such difficult times. Also, I am very happy to be a volunteer for any of your clients. They can contact me for emotional support if that would help in the future, as I know I felt so alone when I was going through this myself.

I returned from holiday

At the beginning of September 2017 I returned from a holiday with my husband to celebrate 30 years of marriage, to find my lovely Mum feeling very poorly. She had put off going to the doctor until my return as she had not wanted to worry me and knew I would support her through any appointments now back.

I took her to the doctors that next day. She was admitted to hospital immediately due to her blood test results. Initially, they were struggling to work out what was wrong. Within a few weeks, she was diagnosed with Multiple Myeloma (a type of bone marrow cancer). Bone marrow is the spongy tissue at the centre of some bones that produces the body’s blood cells. It’s called multiple myeloma as cancer often affects several areas of the body, such as the spine, skull, pelvis, and ribs.

Mum was told first by the consultant in the hospital and was devastated at how she was going to tell us. So she asked for their help in sharing the diagnosis that she had been given 12 weeks to live. We were all heartbroken but most of all my lovely Mum was so worried about how my Dad would cope. She had been caring for him for the last few years due to mobility issues from hip replacements and foot operations as well as severe arthritis in his hands. This prevents him from doing any fine manipulative tasks. We had both been jointly concerned that he may also be developing dementia.

Cancer too progressed to treat

Mum was discharged from the hospital with pain management (oramorph) in place but nothing else as the cancer was far too progressed to treat. We went through a horrendous few weeks trying to come to terms with my Mum’s illness. There were many low days. My Dad found it hard to cope with an influx of visitors to their home. Carers were coming in several times a day. Mum was being particularly strong for us all. She fought with all her strength to try and prove the diagnosis wrong. She was such a fighter. Looking back, they were probably in denial. As well, Dad struggled with strangers in his home and Mum said she felt a fraud, and they must have got the diagnosis wrong. They refused the carers unless things got worse. We struggled on together to honour their wishes.

Prepared for our last Christmas together

Sadly, we prepared for what we thought would be Mum’s last Christmas. At 3pm on Christmas Day with all the family present I made a speech. It was so emotional. I praised my mum for her strength and courage and reminded her she wouldn’t be going through this alone.

Sara’s letter continues in a future blog post. She shares her feelings and account of the last months with her parents in part two to be published later this month.