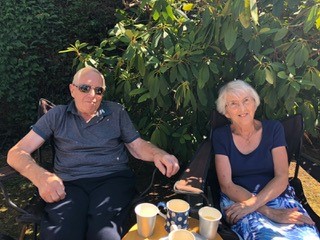 Posted By: After Umbrage
27 Sep

The death of my Mum was very hard but then the following 18 months were even harder. Not only had I lost my beloved Mum but we then had our first Christmas without her very soon afterwards.

Here we continue Sara Bailey’s story of caring for her parents. Chapters one, two, and three are available on the blog too.

Looking back, he quickly deteriorated. His eyes were now so bad. Almost blind, his hands didn’t work and he became very frustrated with everyday tasks. I tried everything to make life easier but with every new aid, there was a new problem and solutions were harder for me to come up with. I had to cook every meal.

But he had no appetite for food or life

He wanted to come shopping with me but it took hours to get him in and out of the car. It was easier to do things for him – but that would have meant giving up on him. I was visiting 4 times a day plus call-outs when he fell – sadly these were several evenings or early hours each week.

The most we did was to go out around the block with him on his beloved mobility scooter and me running next to him to keep up. He couldn’t feel the controls sufficiently to have much control! He was a liability but I didn’t have the heart to say no to him and his one bit of fun!

At this point, I took a job as Admin Support for a friend’s business. This allowed me to take time off for appointments and work flexibly but also have some income as my husband was self-employed and had a serious emergency operation so wasn’t working. We settled into another good routine with me visiting every morning before work, finishing at 2 pm to visit again. The call-outs due to falls were becoming increasingly regular. I was worried all the time and could not sleep. I  was constantly on edge as to what  I was going to find each day.

In July 2019 my son got married and Dad was so proud! In November 2019, their baby was born. My Dad was once again bursting with pride. They called her Rose so Dad was on a mission for me to take him to the garden centre for a red rose bush for my Mum and a pink rose bush for Rose.  He had me busy with errands and things he thought he couldn’t do without!

In 2020, I started thinking ahead to a holiday I had booked for June and arranged for my children to cover me. Dad was getting increasingly anxious about it so I sourced a carer who was very highly recommended. When I learned she was too busy, I broke down. She was the first person to understand what my stresses were and gave me advice and people to turn to.

I had someone understand my struggle for the first time

I let it all out!

Next steps were getting Dad used to his new carer. Dad was so reluctant to have a carer but she was a god-send to us both. I don’t know what I would have done without her.

Dad formed a very special bond with his carer and they joked about the difficulties and embarrassment he faced. I struggled on at weekends but I wasn’t sleeping for fear of Dad falling and getting calls in the middle of the night.

My health was suffering

Apart from my wonderful husband and children, I hid this well as Dad was so afraid he was becoming a burden.

As Coronavirus struck, our holiday was cancelled. With lockdown, I was furloughed to protect my Dad. I was his only visitor plus his carer. He gradually stopped wanting to go out anyway and just a walk down the garden holding on to me was a struggle for him. It was a very sad existence and he spoke often now of wanting to give up.

In July 2020, with furlough no longer an option, lockdown lifted, I broke down with my Brother and asked for help. I set up a rota of him and his wife to help out occasionally. They prepared Dads tea’s occasionally.

Who would have guessed that a few weeks into this arrangement, my brother walked into the fateful scene. Dad had a fall and died.

I had only left a few hours earlier

Dad and I had an ice cream. It was a beautiful day and dad fancied one – great as his appetite had been awful for the last few days. He was reluctant for me to leave, but not unwell – as far as I knew – and I made a point of leaving as I had arranged an afternoon cuppa with a friend in her garden. I didn’t want to be there when my brother arrived – it defeated the point of me having him to help out.

It was the last time I saw my lovely Dad alive

We were sat in the garden when the call came from my brother. 10 minutes later I was there and my brother was still on the phone to 999. It was too late, I found Dad still positioned over his walking frame. He’d fallen over it and the bar was across his throat. I felt for his pulse but he had already gone. My biggest regret is that my poor daughter had to witness the scene we walked into – it still haunts her now.

Dad’s funeral was in the middle of lockdown

We were limited to 30 people which prevented us having the send-off he deserved. However, we have tried to do him proud in everything since.

My first Christmas without Mum and Dad in 2020 was difficult. My birthday too. I know the saying is life goes on but gosh it is so hard. I have moments where I forget and think I’ll tell them this and that, or save a magazine for Mum. I’m sure time is a great healer and look forward to being able to reminisce without sadness. At the moment, along with sleepless nights due to Menopause, I am awake almost every night worrying about the future and the fear of losing someone else dear to me before I am strong enough to cope with it.

Both parents died at 4.45 and to this day I still wake at this horrible hour

What I do know is that I do not have any regrets about giving up my jobs to care for my Mum and Dad. My aim at the beginning of all of this horrible journey was to care for them. I loved caring for them and I know they appreciated everything we did.

My coping thought is that Dad is finally with Mum and I can’t be selfish. He couldn’t go on with the level of care he needed, so he is in the right place for him. There is no way he would have coped with being in hospital following a fall without me visiting and supporting him in these difficult times due to Covid. He did not want to go into a nursing home which, even he was saying might be the best option as he was struggling to remain at home. I can hold my head up and know I did what I could and I don’t have regrets. Just loving memories of a wonderful childhood and loving Mum and Dad. I just hope this dark cloud will lift soon and I can not be all consumed with grief – my husband and children need me back. My grandchild is my sanctuary and without her, I don’t know what I would have done.

Thank you for listening and helping me heal by writing it down for the first time. It has been emotional but therapeutic. You can see why I say, “The death of my Mum was very hard – the next 18 months even harder.”